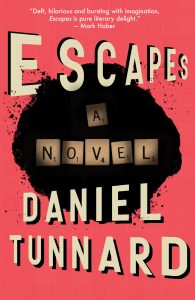 I first met Buenaventura Escobar in late 2005, some six years after the culmination of the events described in this book. He was looking for translators with no knowledge of German to translate his self-taught German novel, Der Sauerstoffbehälter, which had proved an unlikely success, and a mutual friend joined our fates, the way mutual friends obliviously do. Although Buena had something of a reputation in literary circles as a recluse, he always struck me as terribly convivial for a hermit. Being a bit of a misanthropic bon vivant myself, we hit it off, and I translated four of Buena’s books during his lifetime.

Escobar mentioned the present book to me on only one occasion, a drunken evening in 2008, when I got the impression that this was just an idea of his he was tossing about to see if it stuck—that of a bilingual novel about a game of Scrabble that switched back and forth between languages and perspectives, about a board game long out of fashion—rather than a long-since-completed book coauthored with his first wife. He showed me a scrawled diagram of a completed Scrabble board on which every word was valid in English and Spanish. I shrugged. I had little interest in Scrabble back then, and Escobar was always coming up with weird ideas for books he never got round to writing.

The two manuscripts that make up the present work were found in different rooms amid the sprawl and clutter of Buenaventura’s now semifamous residence on Calle Emilio Civit, Buenos Aires, after his untimely death in a sailing accident in 2017. One half, the “Buenaventura” side, was printed out in Spanish and found among some six or seven unpublished manuscripts. The other half, the “Florence” side of the book, was found in a large brown padded envelope with a Bismarck, Oregon, postmark, dated October 2005. The envelope had been opened, although it wasn’t clear whether the handwritten pages inside had been read. It was with considerable delight that we worked out that these two manuscripts fitted together. (There may well be more to this; there are still two rooms in Escobar’s home full of papers, whether manuscripts, notes, or, who knows, mere lists of verbs valid for Scrabble play, but neither I nor anyone else connected to Escobar’s estate have found the time or wherewithal to tackle such chaos.)

Ever the literary prankster, Escobar was well-known for not only publishing his books pseudonymously but also paying ghostwriters to write books published under his name, which led to early doubts as to the authorship of these manuscripts. However, the style of the Oregon manuscript and the information offered therein convinced us that it is genuinely the work of Florence Satine, although how Buenaventura managed to locate Satine, or indeed persuade her to turn out such remarkable work, is something that will remain a mystery, awaiting the unlikely reappearance in public life of its author (unlikely for reasons explained herein). As can perhaps be appreciated of a manuscript written in this manner, the book was a fragmented one, not entirely fit for publication. But in collaboration with Reise Hirsch, Escobar’s long-standing editor, I spent a good year translating Escobar’s parts, polishing, editing, and trimming, until we had what we hope is something readable.

Anyone with a passing interest in international competitive Scrabble and a long enough memory will be familiar with the story of the rise and fall of Buenaventura Escobar and Florence Satine. The leading lights of the 1990s Scrabble boom, Escobar won the Spanish World Cups of 1994–96, while Satine took every honour going in 1997 and 1998, before the shocking denouement of the 1999 World Cup in Asunción brought a sudden end to competitive Scrabble, at least in the form organized by CompScrab. The subsequent FBI investigation into the so-called Scrafia, the shadowy organization at the dark heart of CompScrab, and its ringleaders, Pelusa, Gachi, and the late Clara Gilbert, their trial and (lenient) sentencing in May 2000, has cast a shadow of suspicion over our duo’s achievements, amid revelations of match-fixing and other more insalubrious business, much of which the present manuscripts go some way to confirm. Although the FISE and other Scrabble federations have sought to downplay the achievements of CompScrab-era players, imposing their own Year Zero in 1997 with their inaugural world championships, the achievements of Satine and Escobar should be considered at least on a par with their latter-day peers; much of this historical revisionism, the perception that this period was a complete anomaly, is simply sour grapes.[1]

One can only speculate on how Buenaventura Escobar and Florence Satine might have fared in the more dignified circumstances of competitive Scrabble in the present century. Certainly, they would have found proceedings considerably more sedate than the hard-and-fast times of the 1990s; they may have recoiled at a level of transparency and diligence unheard of in the sullied history of this great game in the 1993–99 period. After the glory days of six-figure prize money, they might have baulked at the prospect of playing for today’s derisory (by their standards) five- and even four-figure sums. Then again, it was always clear that Satine and Escobar were no mercenaries, such was their raw enthusiasm for the game; they would have played for free. One is even tempted to conclude that, had the competitive Scrabble world of the mid- to late 1990s been as cash poor as the modern game, this pair might still be with us today.